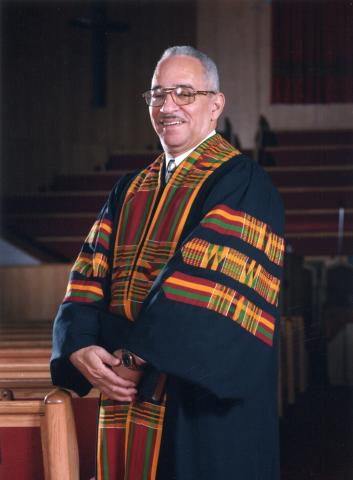 Rev. Dr. Jeremiah A. Wright, Jr. was born in Philadelphia, Pennsylvania. He completed his elementary education in that city and then went to Virginia Union University. After three and a half years at Virginia Union, Pastor Wright left school and entered the United States Marine Corps. He transferred from the Marine Corps into the United States Navy where he served as a cardiopulmonary technician. After six years in the military, Pastor Wright transferred to Howard University where he completed his undergraduate studies and received his first master’s degree. His second master’s degree in the History of Religions was from the University of Chicago Divinity School. His doctorate was received from the United Theological Seminary under Dr. Samuel DeWitt Proctor. In addition to Dr. Wright’s four earned degrees, he has been the recipient of nine honorary doctorates.

Rev. Dr. Jeremiah A. Wright, Jr. became Pastor of Trinity United Church of Christ on March 1, 1972. Within a matter of months he demonstrated an understanding and deep commitment to help Trinity UCC achieve its motto and vision. The motto, “Unashamedly Black and Unapologetically Christian,” was a phrase coined by his predecessor, the Reverend Dr. Reuben Sheares, and was officially adopted by the congregation shortly after Pastor Wright began his ministry. A student of Black Sacred Music, ethnomusicology and African Diaspora studies, Dr. Wright is an historian of religions. The foundational strengths gained from these studies shaped Dr. Wright’s vision for prophetic ministry. As Senior Pastor of Trinity United Church of Christ in Chicago, IL, where he served 36 years, Dr. Wright combined his studies of West African music and Judeo-Christian thought to create over 70 ministries to address the needs of the community and to enrich the lives and faith of his congregants by moving ministry, as stated in his own words, “from theory to praxis.”

Dr. Wright said in a recent article: “I have tried to bring those two different worlds together [the academy and the pew] in the context of pastoral ministry in an effort to move an ignored people from hurt to healing and from hate to hope. My mission at Trinity has been to bring those worlds together by using the Gospel of Jesus Christ and the life of Christ as a model for what is possible, of what might be, and of what our faith really is—‘the substance of things hoped for and the evidence of things not seen.’ ”

Under Dr. Wright’s leadership, the membership of Trinity United Church of Christ grew from 87 members (in March of 1972) to over 8,000 members while he served as its pastor. Pastor Wright retired from the pastorate of Trinity after serving for 36 years.

Dr. Wright has lectured at seminaries and universities across the United States. He is currently an adjunct faculty member at the Ashland Theological Seminary, Lancaster Seminary, The Chicago Theological Seminary and The Samuel DeWitt Proctor School of Theology at Virginia Union University. He has taught courses at Garrett Evangelical Seminary, The Seminary Consortium for Urban Pastoral Education (in Chicago) and Catholic Theological Union. He has been teaching Intensives annually at STVU in Richmond, Virginia since 2008.
Pastor Wright’s ministry included the construction of two senior citizen housing complexes and being the CEO of a corporation which was comprised of six subsidiary corporations: The Higher Education Corporation, a Childcare Corporation, a Healthcare Corporation, a Federally Chartered Credit Union, a Hospice Care Corporation and the Kwame Nkrumah Academy (an African- Centered Christian elementary school, started by Trinity UCC in 2008).

Dr. Wright has published four books of sermons widely used in seminaries. In addition to his four books of sermons, he has written a history of Trinity United Church of Christ (A Sankofa Moment). He has also authored numerous articles for academic journals and theological education textbooks. In addition to his seminary-teaching responsibilities at Virginia Union University, Chicago Theological Seminary and Lancaster Seminary, Dr. Wright also lectures at colleges and universities in the fields of Africana studies, Black Sacred Music, African religions and the African American experience in the Black Atlantic.

He is a co-founder of the Center for African American Theological Studies in Chicago (CAATS) and the proud mentor of 18 graduates of the Samuel DeWitt Proctor School of Theology at Virginia Union University who completed their seminary work through the CAATS program. While serving as Pastor of TUCC, Pastor Wright was responsible for 42 members of the congregation earning their seminary degrees and being ordained into the United Church of Christ denomination.

He is also a co-founder of the Samuel DeWitt Proctor Pastors Conference and he currently serves as a member of the Board of Trustees of Virginia Union University, The Kwame Nkruamah Academy and The Samuel DeWitt Proctor Conference. As he was concluding his Pastoral Ministry at the end of February, 2008, Dr. Wright took his first sabbatical leave and for the last three months of his 36-year pastorate, he enjoyed vacationing and relaxing with his family. On May 31, 2008, Dr. Wright concluded his work as Senior Pastor of Trinity United Church of Christ. He was voted Pastor Emeritus of that congregation and now spends his time preaching and teaching seminary.